UnDisciplined: birds are shrinking due to climate change, especially small-brained ones

In our brave new world of climate change, scientists know that the body size of many North American migratory birds has been shrinking. According to a new study – based on the analysis of over 70,000 individual birds – they are not effected equally. Bigger brained birds have been able to outthink the shrink... at least to some extent.

Justin Baldwin and Carlos Botero are ecologists and evolutionary biologists at Washington University in St. Louis. 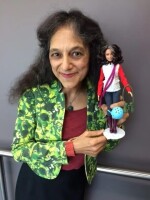 Nalini Nadkarni
Nalini climbs tall trees to study rainforest canopy ecology. She worked with Mattel to create a Nalini-lookalike “TreeTop Barbie” to inspire girls to study whatever they are curious about!
See stories by Nalini Nadkarni
Related Content