Thank you for your support this fall! We are still working to meet our overall goal. Help us get there by donating now!
Eating the Past

Eating the Past: Exploring food from every state

JAMIE: It’s good to be back in the UPR studios here in Logan Utah with Tammy Proctor and Jeannie Sur for season two of Eating the Past. This season we are trying something a little different: each episode will focus on the food histories and traditions of one of the 50 United States, plus the District of Columbia and Puerto Rico.

Tammy came up with this idea, in a dream I think, so maybe she can tell us a little about how this occurred to her?

TAMMY: It was a combination of procrastination, since I was supposed to be working on my syllabus, and jet lag, since I had just returned from six weeks in the UK.

I think the idea of looking at different parts of the US is an intriguing one partly because of the variations of food and the strong opinions about certain preparations that we encountered in our first year doing the radio show. I'm thinking of BBQ, for instance.

Jeannie, what excites you about doing a state-by-state culinary journey?

JEANNIE: I’m very excited by our theme this year. At first glance it seems to be an easy task, but as the three of us have discussed it’s a complex question. What makes a food tradition from that state distinct, how did it come about but also how has it changed over time? I’m always interested in the immigrant story and all of the traditions of each states are influenced by immigrants, old and new.

JAMIE: We bring a lot of geographic experience to the table. I grew up in Florida, and have lived in Pennsylvania, Texas, New York and Maryland, before settling in Utah. Jeannie and Tammy, what about you?

JEANNIE: I have lived in a few states, I’ve lived in Washington State, Alaska, Minnesota, Massachusetts, Virginia and for a short while Washington D.C. This project is a great way for to re-live my experiences and also share the best aspects of the states I have lived in and loved. I especially loved living in the Twin Cities, Minneapolis and St. Paul.

And while I associate myself with being from the North West, the Midwest and especially Minnesota is where I have family roots. It’s where my grandmother immigrated to in the U.S. and she lived most of her life in Minneapolis and Duluth. It’s also where my dad first lived and even now all of his sports ties are with Minnesota. It’s a place where I have childhood memories as well as a place where I lived right after college and have influenced the way I think about community and sustainability. Plus, like anyone else who has experienced the Minnesota State Fair, I too am a big fan!

TAMMY: I grew up in Kansas City, Missouri, which is a bit of a crossroads of food cultures. We had street tacos on the curb at little taquerias on Southwest Boulevard, world class barbeque at Gates and Arthur Bryant's in downtown, fish fries of locally caught crappie, and a famous family-style fried chicken restaurant near my house called Stroud's, just to name a few options.

I went to graduate school in New Jersey, which really opened my eyes to the seafood culture of the east coast, not to mention NY-style bagels. We next moved to Sheboygan, Wisconsin, home of an annual bratwurst festival, and then to SW Ohio, again a kind of crossroads for food.

JAMIE: Well, that covers 16 states right there! Join us for Eating the Past every Sunday at noon, right before the Splendid Table, on your UPR station.

Tags
The 50 States Food and DrinkUPR
Jamie Sanders
Ja historian of Latin America at Utah State and his family’s cook. He grew up in the rural South and loves its regional cuisine, but a study abroad trip to the Yucatán when he was a teenager really awakened him to international food culture.
See stories by Jamie Sanders
Tammy Proctor
Tammy Proctor is a specialist in European history, gender, war, and youth. Dr. Proctor has written about Scouting, women spies and the way war affects the lives of ordinary people. Currently she is writing a book on American food relief to Europe during and after World War I. She has worked at Utah State University since 2013 and is a native of Kansas City, Missouri.
See stories by Tammy Proctor 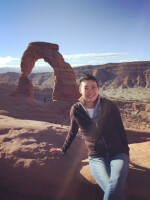 Jeannie Sur
With a BA in Political Science and a Master of Divinity, Jeannie Sur has been at USU since 2017. Originally from the Pacific Northwest, Jeannie loves Utah for the outdoors and its mountains, although she misses the Pacific Ocean. No matter where she's lived, she's been a listener and supporter of public radio. Jeannie enjoys mid-size cities, textiles, and individual sports, especially cycling and swimming. If she could have one superpower, she would shrink furniture for easy moving. She hopes to one day have more animals and a sauna. (#lifegoals)
See stories by Jeannie Sur
Related Content