A boat from the early 1900’s has been uncovered on the shores of the shrinking Great Salt Lake. Angelic Anderson, a ranger at the Great Salt Lake State park, says the boat is the W.E. Marsh No. 4.

According to Anderson, the 40-foot motorized boat, complete with a cabin, was made in San Francisco and brought to Utah between 1902 and 1904.

“It was used in helping to build the Lucin cutoff. That's the railroad that cuts the lake in half. They would transport passengers from other areas of the lake and bring supplies to the railroad. She had a speed up to eight miles an hour which was awesome at the time,” Anderson said.

“A sailor had gone out and actually lost his keel in our deep channel, and so we had to try and locate that keel and make sure it wasn't going to become a hazard. They actually saw a side sonar of what looked to be an outline of a boat. They sent a diver down; he confirmed it was a boat. And that's when it was figured out to be the W.E. Marsh No. 4,” Anderson said.

It wasn’t until 2022 that lake water levels dropped low enough to uncover the boat. Anderson says the water line has receded so that visitors to the Great Salt Lake State park can practically walk up to the boat. 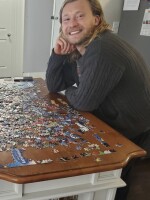 Max McDermott
Max is a neuroscientist and science reporter. He researches a protein receptor and its effect on opioid drugs in the brain. He reports on opioids, space and Great Salt Lake. Like Uncle Iroh, he believes that the cure for all ailments is more hot tea. He is also an avid jigsaw puzzler.
See stories by Max McDermott
Related Content