UPR doesn’t happen without YOU! Help us reach our goal today as we spring to the finish line. GIVE NOW
Utah News

The Bureau of Land Management is seeking public comment on developing a management plan for Grand Staircase-Escalante National Monument. A series of virtual and in-person meetings are planned through September 7.

The Bureau of Land Management is kicking off its planning process for managing Grand Staircase-Escalante National Monument with several public hearings. The monument is a series of plateaus that extend 100 miles from the Grand Canyon to Bryce Canyon. President Joe Biden restored the monument to its full size in 2021, reversing a 2017 order by former President Donald Trump that cut it by half.

Kya Marienfeld, with the Southern Utah Wilderness Alliance, said the meetings will help determine BLM's priorities for managing the region.

"It's a really great opportunity for the public to go and ask a lot of questions," Marienfeld said. "Every question you ask, every comment you make, whether it's formal or informal, is something that the land managers will take into account."

There is an online BLM scoping meeting set for 1 PM on August 30th; in-person meetings are August 24 at Escalante, August 31 in Kanab, and September 7 in Panguitch.

President Bill Clinton designated the region a national monument in 1999. Marienfeld said it got its name from its colorful layers of sedimentary rock.

"Grand Staircase was established primarily as a science and research monument because of the wealth of ecosystems and paleontological resources and cultural resources that are there," Marienfeld said. "It's a landscape-level monument, not just protecting this one specific site."

Marienfeld said with the ever-growing number of visitors to the monument, there is concern over how the BLM will determine what areas will be open for recreation, and which parts will remain pristine.

"There are more people going now than I think we're ever anticipated, and it makes sense to plan for that kind of use into the future where people can have a great experience," Marienfeld said. "And then here's the areas that really is the back country that's going to be away from that with far less visitation." 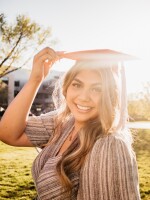