Recognized as one of the most fatal illnesses in the United States for both men and women, eating disorders are continuing to grow in prevalence. The snapshot notes that in a global review of more than 90 studies, the proportion of individuals with an eating disorder during a specific period increased from 3.5% from the years 2000-2006, and then 7.8% from 2013-2018.

Sara Boghosian, licensed psychologist and faculty in the psychology department at Utah State University, said this global concern is just as strong in Utah. “Research suggests that folks who have diagnosable eating disorders are either four to six times more likely to attempt suicide than those who are not diagnosed with an eating disorder,” Boghosian said. “And given the high rates of suicide we have here in the Mountain West, and in Utah, that's pretty concerning.”

There are many risk factors affecting women with eating disorders. The snapshot names media influence and social media as playing a significant role in body image. Constant access to unrealistic beauty standards and conversations about dieting, calorie counting, and weight control tie a woman’s value to their physical appearance. However, these factors alone cannot be to blame for such a diverse issue.

“I like to think of it more as kind of a perfect storm of things that come together for a person as opposed to thinking that it's something where we would find a smoking gun,” Boghosian said. “I've treated hundreds of women with eating disorders, and some of them don't have negative body image, and many of them don't have trauma.”

To address the rise of eating disorders in Utah, the snapshot suggests early intervention to educate students about eating disorder prevention, as well as seminars to educate healthcare professionals about treating eating disorders. Boghosian also highlighted the need to shift our perspective on weight and its ties to happiness as a society.

“What young people that I work with kind of hear from our society is that thin equals happy, and thin equals successful and thin equals worth somehow,“ Boghosian said. “If we can move more in the direction of focusing on the bigger picture of what actually equates with worth and success and joy. I think that will go a long way as far as helping this.” 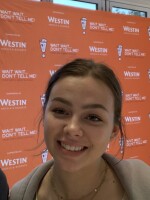