There is a lot of concern about the idea of teaching critical race theory in schools and how it could impact students. Last month, Utah’s State Legislature passed a resolution making recommendations to the Utah State Board of Education about critical race theory. But what is it and is it being taught in Utah?

Marisela Martinez-Cola teaches sociology at Utah State University and said critical race theory was born out of an effort of people in the 70's beginning to ask tough questions about the situations they were a part of.

“Critical legal study said law is not as pure as I think most of us had hoped it would be. That you would just apply it and it's done. We need to be able to look at the power dynamics involved. People who are in poverty lose cases, much more frequently than people who have the money to be able to work in the system,“ said Martinez-Cola. “Other legal scholars began to say, well, if we're going to center power in the discussion, I think it's okay to put another lens on that, and center race. What is the role of race in all of this?”

Martinez-Cola said because critical race theory is a theoretical model it is taught mostly at the graduate level, occasionally to undergraduates.

Vanessa Johnson-Ojeda, a University of Utah doctoral candidate, agreed. She recently taught an honors course in critical race theory and with permission shared some of her student’s comments.

“Through critical race theory and its tenets, I am now better equipped to critically evaluate and face the issues of race around me. I can use this as a tool as an engineer to promote and help build a cleaner and safer future for all,” said a future engineer.

“I don’t think I am inherently racist but I do know I am inherently privileged. I can be merciful with myself and others’ unconscious bias, but I cannot be sympathetic to the legalized structures that have perpetuated systematic racism for centuries,” said another student. “I believe I learned more about myself in this critical race theory class than any other, and I’m glad I did this at a critical time in our nation and country….the perspectives afforded in this class have allowed me to reach for the goal of equity and equality in our country.”

Johnson-Ojeda emphasizes respect for each other in her classes, and said that allows students to have some rich conversations without feeling attacked or threatened by difficult discussions. That’s something that concerns some Utah parents, she said.

Johnson-Ojeda said her students feel they are developing a toolset for their future.

“There are some concepts that some people are putting in the critical race theory bucket that on face value seem like they would be difficult for us to understand from the perspective of the K-12 student. Some people are saying it is telling students of color that they are an oppressee and students who are white that they are an oppressor and they need to take responsibility for those types of things,” Cummins said.

These concerns prompted the legislative action despite the governor’s omission of critical race theory from the special session agenda. Cummins said the governor is supportive of the specific recommendations in the resolution the legislature passed.

These recommendations are that curriculum should not include the following ideas: that one race is inherently superior or inferior to another, that an individual should be discriminated against or receive adverse treatment because of their race, or that an individual’s moral character is tied to their race.

Cummins said the governor is also not ready to shy away from difficult conversations.

Martinez-Cola said there are two distinct Utah student audiences she needs to reach in her classes, but their response is the same when she teaches about Earl Warren’s role in Mendez v Westminster and Brown v Board of Education, both about school de-segregation, and similar cases.

“I have students of color who need validation that their existence in this world is important. Then I have another group who just need education,” she said. “So the way that both students respond, which is really fascinating, is that they both asked the question “why didn’t I know that?”.

Martinez-Cola said that critical studies are not about criticizing for the sake of criticizing and like the governor, thinks it is important to examine and question our history.

“The way that I like to explain it to people is that it's about more about your critical thinking. It's about thinking, you know, asking questions. And so when we talk about sort of getting rid of critical race theory, it's really telling people to kind of get rid of their critical thinking skills,” said Martinez-Cola.

“Inquiry, critically asking  questions, having an opinion, having thoughts and ideas, that is quintessentially an American experience. And when you start to tell people, you're not allowed to ask questions, you can't talk about that. Because it's gonna make people feel bad. When people say we’re going to stop all discussion about race or racism or critical race theory, one of the things I find interesting is the argument then becomes of course, the slippery slope argument. If you say that we can’t talk about race, what is the next thing you’re going to say we can’t talk about?” 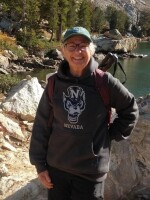 Harriet Cornachione
Harriet Cornachione works as a science news reporter at UPR. Every week she investigates cool new science research and events and then writes about what they for our lives. She is a graduate student in geology and studies sand dunes to learn about past drought in Utah. For fun, she enjoys everything outdoors – hiking, biking, climbing and camping – and she loves to travel to and learn about different countries and cultures.
See stories by Harriet Cornachione
Related Content